Protestors in Australia Demand Safety and Equality for Women 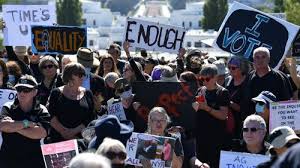 The week of March 14th, dozens of peaceful rallies and marches were held across Australia in reaction to the various sexual assault allegations that piled into the news after former staffer, Brittnay Higgins, went public about an unnamed colleague assaulting her in the Parliament House. The most publicized rally took place in Canberra, but many “March 4 Justice” protests were held simultaneously across Australia. Numerous marchers said they were marching for those who could not be there. They marched for the survivors and for every victim of sexual assault.

On Monday, March 15th, Prime Minister Scott Morrison asked those who organized the rally to meet him in his office to have a discussion, as he was “too busy” to hold a press conference or go out to the rally. They denied this offer, saying, “we will not be meeting behind closed doors.” Too much has already gone on “behind closed doors”, so there is a mutual agreement among protestors that any and all meetings and actions should be done in the public eye.

Multiple well-known people have been called out since Higgins went public with her allegations. Attorney-General Christian Porter has been accused of raping a 16-year old girl in 1988, an allegation that he denies. Linda Reynolds, Higgin’s former boss, called her a “lying cow” when she came out with the accusations against the unnamed cabinet member. A common sign being held in the 40 connected rallies read, “Why would she lie?” Both Christian Porter and Linda Reynolds have since taken extended sick leaves.

Brittnay Higgin’s story is not an isolated one. According to the Australian Human Rights Commission, in 2018, nearly 40% of all women answered “yes” on a survey asking if they had ever been sexually assaulted in the workplace. Near the end of her speech, Higgin’s pleaded with her government officials, saying, “It’s time our leaders on both sides of politics stop avoiding the subject and side-stepping accountability. It’s time we actually address the problem.” Women worldwide agree with Higgins, hoping to rid workplaces of gender discrimination and sexual assault.